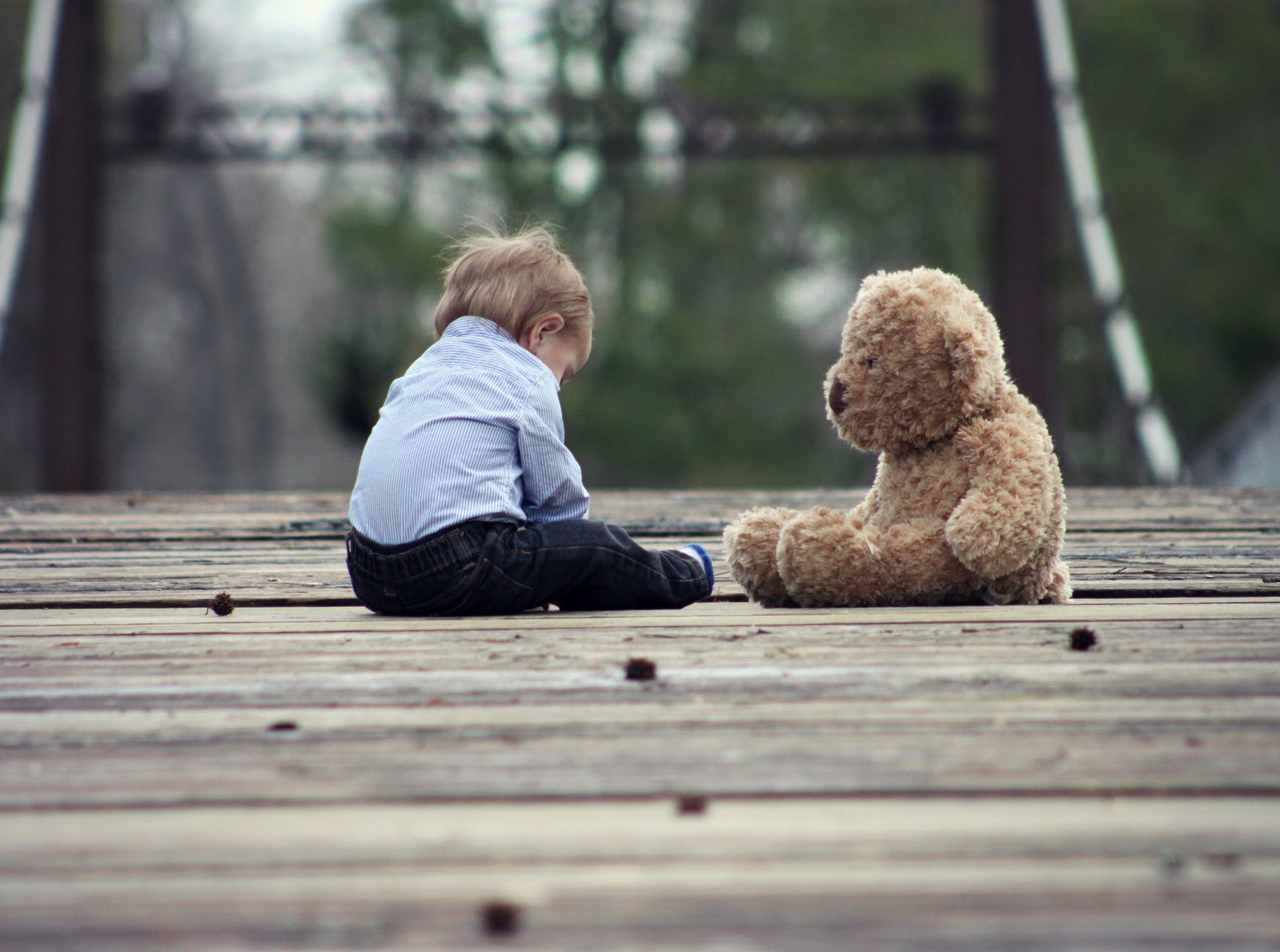 Your imagination can be a powerful thing.

I still remember the frightening feeling of being chased by a monster when I was a little girl. I would run into my grandparent’s bedroom as fast as my little five-year-old feet could carry me.

“Gammy, wake up! There is a monster in my room!”

My grandmother would sit up, switch on the bedside lamp, and pull me up onto her lap.

“Doll babe, there is no such things as monsters. It is just your imagination running wild.”

I shuddered as I saw it staring at me from the hallway.

My grandmother, comforting as always, would hush me and tell me I could lay with her for the night.

“It’s just your imagination playing tricks on you.”

She would switch off the light, and just like that—I would fall asleep forgetting all about the monster.

I believed my grandmother all those years ago; your imagination will play tricks on you when you are young.

There was no such thing as monsters…or so I thought.

Fast-forward 20 years and my feelings about that changed. When my son, Eagan, was about three months old, he would cry and cry and cry; all day and all night. I took him to the doctor and they could never figure out what was wrong with him. My concerns were brushed off with, “Some kids are just criers—he will grow out of it.”

The cries turned into screams, especially at night. Whenever Eagan wasn’t crying, he would just stare into space. It almost looked like he was in a trance, just staring—eyes glued to nothingness. Once Eagan hit his toddler years, he would cry so hard that he would pass out. And again, when he wasn’t crying, he had that deer-in-the-headlights look on his face. It was exhausting being up all night with him.

I felt like a failure as a mom; my child was never happy, and I couldn’t figure out how to comfort him.

By Eagan’s third birthday, his behavior suddenly changed. The wailing cries that once accompanied my ears ran silent. Eagan wouldn’t talk to anyone; not a peep escaped him.

We came home from the doctor that day with a diagnosis—mutism. I set Eagan down in his bedroom to play with his building blocks while I googled away his new diagnosis.

My mind raced with a million different thoughts as I thought about what my little boy’s life would entail. Would he ever speak again? Would he be able to make friends, or could he find a job? As I was mourning the loss of Eagan’s potential, I heard a loud crash. I threw my hands in the air and ran to his room as fast as I could. I peered down at the floor where Eagan had innocently been playing. Wooden blocks laid splattered across the floor. Eagan’s eyes met mine, with the deer-in-the-headlights look as usual, except the next thing that happened sent shivers down my spine. Eagan slowly lifted one arm up and pointed to the closet of his bedroom.

Feeling spooked, I brushed it off, grabbed Eagan, and headed to the kitchen to make dinner. Broccoli cheddar soup sat on his spoon as I made airplane noises for him. He didn’t seem thrilled by my animation, but he ate the soup anyway. Just as I scraped the last bit of broccoli from the side of the bowl, a loud slamming noise rattled my ears. I looked up to Eagan, and he was staring at his bedroom entrance; again, his little arm rose and he just pointed—in silence.

The next day was no different. An unsettling feeling lingered in the house. It felt like someone was watching us. I laid Eagan down for a nap and went to fold the overflowing basket of laundry. As I folded each little shirt, I started to hear what almost sounded like moaning noises. I stopped folding and held the shirt as I listened intently, again—moaning noises were coming from Eagan’s bedroom.

I set the shirt down and made my way to his room. As I opened the door, ready to give him a stern talking-to, I gasped. Eagan laid peacefully asleep in his toddler bed.

I stood for a moment and just stared at him; silence covered him. I blew it off and went back to folding laundry.

By nightfall, I felt jittery. Nothing but bad vibes had been running through my veins all day, and I just wanted to hold Eagan close. I laid Eagan in bed with me for the night, hoping he would drift off without complaints. The clock on my nightstand blinked bright red numbers as I tried to drift to sleep, but something was keeping me awake. I’m not sure if it was the shocking diagnosis we received which kept running through my head, or if it was the odd behavior that Eagan had been exhibiting; either way, I couldn’t sleep.

I rolled over to the other side of the bed when something caught my eye in the hallway. I thought I saw the dark shadow looking at me from a distance. I blinked and the image disappeared. There was nothing in the hallway except darkness.

I had this anxious feeling that kept building up inside of me—I just couldn’t shake it. I pulled the blanket up to my neck and laid down with my sleeping son.

Days turned into weeks, and each night Eagan accompanied me in bed. He seemed to be doing better; a smile would spread across his face every now and then. He seemed to be more alert and just a happier child in general. Things were going well for us.

A few months had passed. Eagan seemed cheerful as ever, and I felt content as well. My happy little boy was back. There wasn’t a worry in my mind.

I pulled the pajamas with little brown teddy bears covered on the shirt over Eagan’s head. He was going to sleep in his big boy bed tonight. I could tell he was a little hesitant at first, but I knew we had to break the habit of him sleeping in bed with me.

I tucked Eagan into bed and pulled the fresh blankets—straight from the dryer—over him. He pulled his arms up to my face and put each little palm on the sides of my cheeks. His little eyes darted to the closet, then back to me. I cupped my hands over his: “There are no such thing as monsters, sweetie.” He let out a deep breath, I bent down to kiss him on the nose. A reassuring smile spread across his face. I smiled back at my son, then shut the lights off.

The next morning, I awoke to find Eagan gone. I ran through all the bedrooms, I ran outside to look around—nothing. It was like he vanished out of thin air. The cops were called, my family was notified, and Eagan was officially classified as a missing person.

I stared out the window as I watched search dogs run through the yard, cops in tow with huge flashlights. I could feel my heart shatter into a million little pieces after a week had gone by, and there was still no sign of Eagan.

Would I ever see my sweet little boy again?

A year had gone by. I sat in Eagan’s old room. I was finally ready to pack up his stuff and move on from this house.

As I was pulling clothes out from his dresser and packing them way, I had a sudden urge to look inside his closet.

I looked up at the closet door and remembered the last time I stood in this bedroom, Eagan had pointed to his closet door. I thought about opening the door. What would I find in there? I hadn’t even gone in Eagan’s room in the past year.

I walked up to the white sliding door. My eyes studied the shiny gold knob sticking out of the door.

It was almost like I could feel this unknown presence mocking me.

My hands clenched the round knob, and with a slight tug, I opened the closet door. My eyes glanced from side to side, up and down—I didn’t notice anything at first.

After shuffling some clutter out of the way, I came across a notebook, a white envelope, and an old blanket. I opened the flap to the envelope that was tucked inside. There were dozens of Polaroid pictures. I pulled out each photo one by one, and I felt my stomach churn. They were pictures of Eagan. Some of the pictures were of him sleeping, others were of him playing. The pictures ranged from when I first brought him home to up until he disappeared.

I opened the notebook and each page looked to have a schedule laid out. The first time read 8:00 AM—leaves for work. Second line, 4:30 PM—gets home from work. The notebook went on to list Eagan’s nap schedule, snack times, and bed times.

I felt like I was going to faint. There was some sick person spying on the two of us, and this person had been in our home for at least three years, watching us and waiting.

I grabbed the blanket that was bunched into the corner. It smelled like a dead animal and had mold forming on the folds. Folded up inside were a pair of pajamas with teddy bears on them.

I felt the lump in the back of my throat. I turned around and saw Eagan standing behind me. He had a slight glow radiating from his skin. He had a big smile on his face. “Hi mommy, I’m hanging out with gammy. See you later.” I saw my dear gammy hold her hand out to Eagan, and they walked off together.

I collected everything I found and called the police. They sent the bundle of items to the lab in hopes to find trace evidence of DNA.

We are told that monsters don’t exist, but in my case, they did exist—and still do. One thing is for sure. I won’t stop searching until I find this monster; this monster that was hiding in the closet.